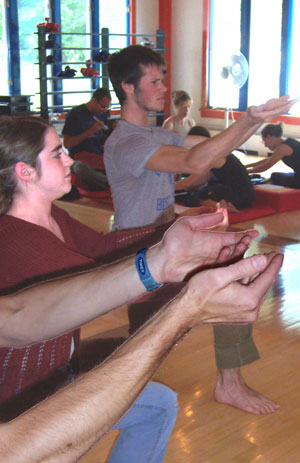 Karmê Chöling and Mudra Institute are presenting a Mudra Space Awareness Summit: A Radical Mind-Body Immersion, Oct. 22-29, with an option of attending just the weekend, Oct. 25-27. Both programs welcome newcomers as well as Mudra adepts.

In anticipation of this deep dive into Mudra Space Awareness, we asked the teachers some questions about their relationship to this profound mind-body discipline.

Please share the first time you participated in Mudra Space Awareness. What were you going through? What attracted you to begin with? Dr. Craig Warren Smith: I was about 21 years old, and an activist in the early gay rights movement around the time of Stonewall. Though I already had an excellent education at Stanford and UC Berkeley, I was in the radical fringes of the counterculture and full of anger at the homophobic bias in all cultures. I needed very powerful medicine to get grounded in everyday reality and let go of my anger. When I saw my first Mudra exercises led by Trungpa Rinpoche at Karmê Chöling in 1971 and later in Boulder and Berkeley in the early/mid 1970s, I was immediately, passionately attracted and that feeling continues to this day.  I could not make sense of it. But it appealed to my radical, intense nature and led me into a lifelong journey into dharma. Acharya Suzann Duquette: You might say that at first you either love Mudra or hate Mudra! Then as you work with Mudra as a discipline, you find its treasures and positive influence on your awareness, creativity, self confidence, and ability to stay in your body. I would say many more people today than in years past find the wakefulness of Mudra to be completely relevant to life on planet earth and a powerful antidote to aggression, ego fixation, speed, and sleepiness.

What is the relationship between Mudra and meditation? Greg Heffron: Mudra is meditation, but in a way which threads through every aspect of movement, speaking, sensing, acting. It is the definition of “Meditation in Action.” However, it has completely changed and turbocharged my sitting meditation practice (especially mahamudra).

Dr. Craig Warren Smith: One could say that Mudra is dance. From a vajrayana (Tibetan Buddhist) point of view,  dance is the joyful play of opposites. Mudra exercises work with such play on many levels both physical and mental. The exercises were influenced by Trungpa Rinpoche’s early training in Monastic Dance in his monastery when he was a teenager in Kham, Tibet.  Later on, after teaching Mudra for decades, I was given an opportunity to teach Mudra to the graduating class of the Juilliard School of Dance Department in New York’s Lincoln Center.  Though these were the most highly trained dancers in the world,  they were overwhelmed, tearful,  challenged and inspired by Mudra. It transcended their training. Many them felt that Mudra spoke to why they became dancers in the first place.

Is Mudra Space Awareness a parallel practice to Qigong?

Acharya Suzann Duquette: These are both powerful embodiment practices that lead to a strong connection with earth, flexibility in body and mind, increased mindfulness, and presence. Mudra, or “gesture” in English, results in heightened awareness of body and the multi-dimensionality of space, and it increases confidence. Qigong works with physical strengthening and flexibility, the energetics of the body, and the stillness and clarity of mind.

How has this mind/body practice supported your life-long spiritual inquiry?

Greg Heffron: Mudra has shown me that the spiritual search doesn’t have to limit itself to ‘calming techniques.’ Mudra finds calmness within challenge, resistance and even fear itself. Conquering these ‘rough’ territories, Mudra then can open us up to deep calm, beyond our small-minded preferences. This is such a radical, tantric “twist,” that one comes away understanding that the “hard core” aspects of being a living being in a living body — pain, fear, confusion, and so on — are all 100% valid experiences if we orient towards them instead of running away from them.

What question begs to be asked?

Greg Heffron: What if I’m not strong enough for Mudra? This isn’t really an issue. Mudra can be adapted to different bodies with different issues. Most of the strength requirements are about using the strength you have rather than “achieving” what another student might do. We’ve had people in their 80s doing Mudra for days at a time, as well as people with disabilities. Thus far, nobody has been injured (although sore muscles do happen), and we’ve found solutions that worked.

Acharya Suzann Duquette: If Mudra is a group practice, what influence does it have in a person’s everyday life? While Mudra is only done in groups, there are many aspects that can be integrated in life. These ways have continued to evolve over 50 years, and are now referred to as the Six Spokes. A key aspect here is how one brings awareness to any moment in order to make a “gesture” in one’s life. Gesture here, or Mudra, is synonymous with waking ourselves up and propelling us to take the next step forward with intent. Mudra’s effect on our daily life will be a main theme of the upcoming Mudra program at Karmê Chöling, October 22-29.

Dr. Craig Warren Smith: Why does the Karmê Chöling Mudra Summit speak to the current moment? The circumstances of the mid 70s when Mudra Space Awareness was developed are completely different than our own time.  Today we’re in a groundless moment when we can no longer count  on entering passively into the steady unfolding of paths and stages of  dharmic paths.  This groundlessness is reflected in the recent upheaval in Shambhala, in the leaderless nature of the Trump era, in the acceleration of global warming and pun-precedented wealth inequality and threat of terrorism.  This is a time similar to when Padmasambhaba went to extreme actions to conquer the Tibeten Bön tradition, and thereby turning Tibet into the world’s platform for transformational spiritual development.   It was a similar time when Trungpa Rinpoche made a crucial decision (codified in “Sadhana of Mahamudra”) to let go of the trappings of Tibetan culture and make a radical, outrageous connection to the most inspired hippies and intellectuals of the counter culture.  This is a similar time.  It is time for radical, transformative action, action that transcends hesitation.  Mudra actually requires this  groundlessness.  We begin every exercise with total groundlessness and we end it that way too. Groundlessness is the ground of Mudra.  But to use today’s groundlessness to optimal benefit, we can not do it alone.  We need a group.  The Mudra Summit will create such a group. 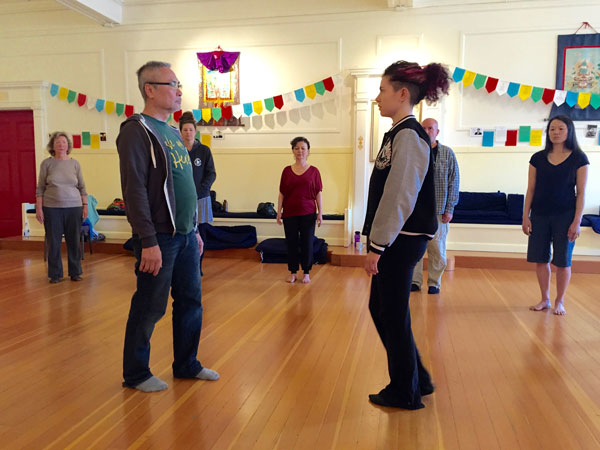 We had an excellent weekend at Berkeley Shambhala Center, with sixteen participants going deep into the theme of “Confidence Beyond Concept.” Led by teacher Greg Heffron, this retreat examined how our focus on “conditional confidence” leaves us feeling poverty stricken and anxious. Together, we worked to exercise our ability to rest in the “unconditional confidence” of basic experience — going “beyond hesitation” and “making a gesture” which eradicates the artificial barrier between “self” and “world.” Resting in the confidence that doesn’t need a basis, we learned to bring together the masculine (mindfulness) and the feminine (awareness) in every moment.