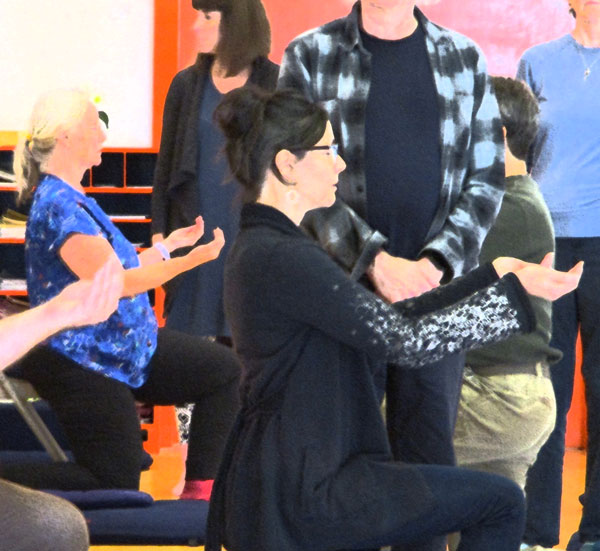 “Chaos should be regarded as extremely good news…Chaos is the great space of emptiness that occurs before genesis. … This space provides an opportunity to reconnect with what lies under the chaos and negativity — inherent awakened nature. Another way chaos is good news is that when things seem very bad, there is a big opportunity for something good to take place.” – Chogyam Trungpa Rinpoche1

Mudra is for NOW

In 1974, the same year Trungpa Rinpoche introduced Mudra Space Awareness (Mudra) to us hippies, he uttered the iconic phrase, “Chaos should be regarded as extremely good news.” It was not just a bumper sticker. It was a prediction. He warned us that chaos was coming within the scope of our own lifetimes. Trungpa wasn’t just prophesying capitalism’s demise. He conveyed a kind of Dante’s inferno in which one would enter the gates of hell and then resurface the better for having gone through.

Trungpa wasn’t just prophesying capitalism’s demise. He conveyed a kind of Dante’s inferno in which one would enter the gates of hell and then resurface the better for having gone through.

Anticipating the breakdown of modern society, he transmitted two upayas (skillful means in Sanskrit) that are fierce and intense enough to transmute the chaos now triggered by Covid-19. These tools are the evocative, haunting poem “The Sadhana of Mahamudra” and Mudra Space Awareness, which is the embodiment practice of the Sadhana of Mahamudra where the words of the Sadhana become postures. Thriving on groundlessness, Mudra must come out of the shadows of Shambhala Buddhism as an essential response to the imbalances that lie at the root of this dark age. The end-goal is to activate transformational “gestures” (“Mudras”) within ourselves and through those gestures, uproot materialism embedded into our lifestyles and by extension, all social institutions that define business-as-usual in the 21st century. 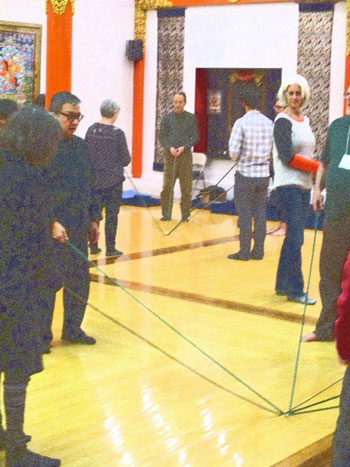 Mudra is a practice that creates comfort with groundlessness. Unlike yoga, chi gong or tai chi, Mudra exercises are not particularly tranquil. Each exercise intensely challenges the practitioner to be a Garuda, the mythical bird-human buried in our DNA. Garuda flies through open space, resting on space itself: groundlessness becomes its own ground. As we change our lifestyles to adjust to the Covid-19 pandemic, we too can rest in space. Mudra can help us transform and adjust to chaos. After doing the postures, we gather into small groups and are asked to put into words the experience of doing the postures. Thus we birth a new kind of language called MudraSpeak – a language of unfiltered, raw experience that can be shared.

Mudra is a practice that creates comfort with groundlessness. Unlike yoga, chi gong or tai chi, Mudra exercises are not particularly tranquil. Each exercise intensely challenges the practitioner to be a Garuda, the mythical bird-human buried in our DNA. Garuda flies through open space, resting on space itself: groundlessness becomes its own ground.

Doing Mudra in an era of Covid-19 can function like a lotus blooming in the mud; uplifting us from helplessness and depression and producing a new class of Mudra-trained leaders who take skillful advantage of the chaos unleashed by the virus. Mudra itself is not new – it has taken a full half century, right up to last year’s Mudra Summit, for leading Mudra teachers to begin to discern the framework that unpacks the depth of meaning held within the exercises, how they rework body and mind, and how to apply them in a practical way to shifting life circumstances. Mudra exercises cannot be done alone. It is a group practice. Retaining social distance, the Mudra Community is in an era of evolving online to realize the potential of Mudra to transmute chaos into human empowerment.

So what did Trungpa mean when he said, “Chaos should be regarded as extremely good news”? Certainly Covid-19 itself is not “good news”. It is unleashing pervasive suffering. However, we can transform this suffering into compassion by applying the precious tool of Mudra. The “good news” of the chaos that the pandemic unleashed is “good” because it produces the incentive for mass awakening of society overall. “Good news” could refer to the reality that in moments of dark despair spiritual renewal is a reality. The notion that Covid-19 could be the basis of spiritual renewal is so compelling that it even made the front page of Wall Street Journal 3 – a main mouthpiece of materialism.

Since the zen-koan like phrase was published in The Myth of Freedom and the Way of Meditation, it has been adopted into mainstream culture, showing up in a Leonard Cohen concert, Pema Chodron’s books (including When Things Fall Apart) and Harvard mathematics lecture halls expounding Chaos Theory2. Chaos Theory, explains the meaning of chaos as a transformational concept. In mathematics, it refers to the reality that by deeply and carefully examining a chaotic event, you may discern the underlying pattern and meaning of the event. Applying this to sociology, Trungpa meant that chaos is an underlying reality beneath the phoney order imposed by culture. For many people, in recent years the appearance of normalcy in our society was beginning to seem very fishy as the Trump era unfolded. 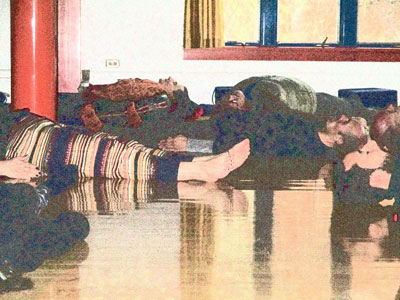 How do we meet this chaos? We should greet chaos with equanimity, leaning into the specific constellation chosen in each moment. Mudra provides a lens to see the underlying sociological and psychological patterns within the current cross-sector social chaos of the pandemic by bypassing our “rational” thoughts, carefully investigating the chaos in our mind and experience, deconstructing our experience into sensory, emotional and cognitive dimensions until — wham! — we can begin to see its underlying logic and then act on that insight. Mudra demands that we let go of the experiencer altogether in order to become in sync with the underlying experiential meaning of each moment. This is the very essence of Tantra: the threshold of nondual experience. From there, we can find the crazy logic behind the apparent disorder of each moment. With that awareness comes marching orders. Trungpa Rinpoche called that moment the “lion’s roar,” when one transcends the chaos with a gesture that dispels hesitation.

The Lion’s Roar, which is the core of one of Trungpa’s books4, became watered down as pop psychology5, but only Mudra transmits Lion’s roar as experience. It refers to the commandment, often articulated by someone playing the role of “shadow,” in leading a Mudra exercise. After the shadow leads the practitioner step by step to a logical precipice, the practitioner must create an emotional leap that lies beyond the rational mind. This leap is what is called “Mudra,” a gesture that catapults one into ineffable nondual awareness is which neither self nor other exists.  At the same time, this gesture clears the chaos. It creates certainty and clarity. Dispelling confusion, it provides the marching orders so that a path forward can be made with tremendous confidence.

This leap is what is called “Mudra,” a gesture that catapults one into ineffable nondual awareness is which neither self nor other exists.  At the same time, this gesture clears the chaos. It creates certainty and clarity.

“Lion’s roar” sounds angry, and in Tibetan spiritual terms it may be considered “wrathful,” but actually the focus is not so much anger but total engagement, total arousal. It could be a very subtle shift of mind or it could be fierce.   My favorite example of this comes from 1984 when I was attending a seminar conducted by Trunpga in Pennsylvania. One day, I was walking down a hallway alongside Pema Chodron. As we walked, we loudly overheard someone making caustic remarks about Trungpa. Without warning, tiny 5 foot 2 inch Pema Chodron, dressed in nun’s robes, jumped up onto the guy and started pummeling him with her fists while she shouted “don’t do that”!!! It was her Lion’s Roar.

Lion’s Roar is best expressed in Western philosophy by the Danish philosopher Keirkegaard6.   Considered the first existential philosophy in the early 19th century, he advocated the notion of “Leap of Faith” in which one goes beyond logic to powerfully assert one’s own truth.   Leap of Faith marks the boundary between German idealism marked by Hegel and Kant and later French philosophers of phenomenology, such as Husserl. In Mudra, we call this “leaning in” to a moment. It relates to certain Mudra slogans like, “Act As If,” which means make a 100% gesture as if you know what you are doing, even if you don’t. In recent years, this notion was adopted as a rally for women to define their role in the workplace by the Facebook chief operating officer Sheryl Sandberg7.

In other words, Lion’s Roar — aka Mudra — is the solution to chaos. It cuts through the surface of chaos to achieve certainty.   Among the bewildering array of upayas (meditation methods) introduced by Trungpa, Mudra is certainly not the only one that could be described as Lion’s Roar. Trungpa found the Lion’s Roar principle in design methodologies, particularly those of the Japanese tradition; for example when a master of Ikebana places an object in a gesture that ”brings heaven to earth” in a holistic design, when a kyudo master shoots the arrow, when a calligrapher makes a transcendent stroke, or when an adept Japanese filmmaker shouts “cut?” to open a new dimension into storytelling.

Mudra’s gestures emerge from the spectrum of every sensory realm and every dimension of the mind/body relationship.

What sets Mudra’s Lion’s Roar gestures apart is that they are not tied to a craft, a sense perception, an art form, or realm of expertise. Mudra’s gestures emerge from the spectrum of every sensory realm and every dimension of the mind/body relationship. This is what ties Mudra to theatre where the aim is to draw upon all senses and the mind/body interaction to transform the actor/audience relationship.   This is also what links Mudra to life when shape-shifting must occur to adapt to shifting circumstances — like the Covid-19 pandemic.

So here we are more than 40 years later wondering what to do as if Trungpa never offered clues to how to handle chaos. Groundlessness is the ground of Mudra,  We may think that our ground is our job, our family, our body, our mind, our breath, our life. But these are all temporary.  The bardo of life gives way to the bardo of dying, which is all about overcoming letting go of everything so that we can launch graciously after our last breath.